Murray McHenry presented a vertical of Hazel's Vineyard wines with our UK Distributor, Louis Latour, and special guests. Below is an article from Louis Latour.

On Thursday 5th March, Murray McHenry presented an outstanding line up of wines, all from one of their vineyards, named after Murray’s mother Hazel.

McHenry Hohnen bought Hazel’s Vineyard in 1996 and have always farmed this organically. The change to biodynamics came over a decade ago and last year McHenry Hohnen decided to work towards certification. In June 2020 both the vineyard and the winery will become certified as biodynamic.

Hazel’s is the most southerly of their vineyards and is blessed with cooling influences from the ocean and the northerly aspect. The vines are planted on 40 hectares of north facing slopes on ironstone gravels on a tributary of the Upper Chapman Brook where they receive plenty of sunshine. Hazel’s Vineyard used to be called Rocky Road but this was changed to Hazel’s for a more personal connection. Rocky Road is now used for McHenry Hohnen’s second label.

Biodynamics – what does it mean?

Biodynamic farming was established by Rudolph Steiner, who created a farming philosophy that centred around the lunar calendar and a range of organic additives and composts used to feed the soil and enhance a plant’s natural rhythms.

Through sustainable vineyard practices, natural preparations and compost, McHenry Hohnen nurture the biodiversity of the soil and vineyards to create exceptionally pure and expressive wines. Through biodynamic farming, the vineyard Manager Mike Sleegers can observe and guide the vineyard and use the natural rhythms of the vines and the environment to allow them to flourish naturally.

Winemaking - hand harvested, whole bunch pressed, full solids and wild fermentation in barrique (approx. 20-25% new). Post ferment, barrels are left cool but unsulphured for 4-months to encourage autolytic activity. Batonnage every two weeks based on flavour and partial malolactic fermentation. Wines are racked with full lees to tank around December and spend two months on lees in tank before being bottled.

As you can see below the oak influence increase as the vines age and their capacity to handle oak increase as the flavour profile increases. This reflects both a stylistic decision and a seasonal decision based on the maturity of the grapes.

The wines all showed astonishing acidity, holding the flavour profile in place and ensuring the wines were still balanced. 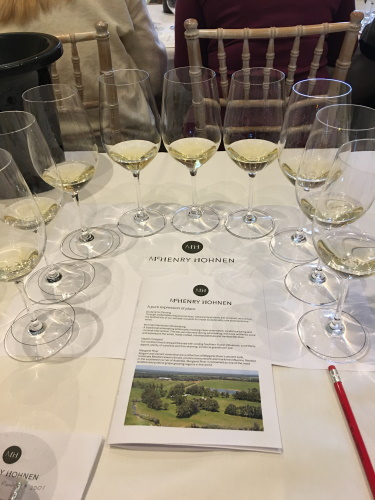 A purist’s Cabernet; unfined and unfiltered, this is an elegant expression of Hazel’s Vineyard with harmony, balance and integrity.

Winemaking - partial wild fermentation in an open stone fermenter. A portion is left on skins for several weeks and the remaining portion is kept on skins for a shorter period before being sent to mature in fine French Oak barriques (20% new) for 14 months. No added acid, tannin or nutrient.

Technical details:
All wines are 100% Cabernet Sauvignon. 2011 and 2012 were labelled as Rocky Road Single Vineyard Cabernet Sauvignon, with Hazel’s Vineyard showing on the label from 2013 onwards. All the vintages tasted were 14.5%.

Winemaking - select parcels of fruit are fermented in open stone fermenters with the use of indigenous yeasts. Some of the wines are left on skins post fermentation for several weeks to provide savouriness and structure to the blend. Others are pressed earlier for freshness and aromatic lift. Each variety is kept separate and aged in the finest selection of French oak barrels for 18 months. The wine is then blended and kept for a further couple of months prior to bottling (approx 30-40% new). The wine remains unfined and unfiltered. All the vintages tasted were 14.5%.

Commenting has been turned off.